Following the Footsteps of Jesus

The process of discernment is directed by the word of God in order to live in obedience to Him; it is aimed at dwelling within history in an evangelical way, following the footsteps of Jesus so that the kingdom of God may grow in the world. Our projects are good if they are not ‘only ours’, if they blossom, like a root, from our willingness to collaborate with all our hearts in the work that God is already doing.”

This was a reflection of Friar Michael Perry, our Minister General, in his letter to the Order and to the sisters of the Second Order for the Solemn Feast of Clare of Assisi in 2019. Although it is based on what transpired at the Plenary Council of the Order of Friars Minor in Nairobi earlier this year, this reflection is apt as we consider the challenges facing the Custody of St Anthony Malaysia- Singapore-Brunei, and in light of the coming Chapter that will determine the Custody’s direction for the next three years.

St Clare of Assisi was a close companion of St Francis of Assisi. Gender discrimination did not allow her to follow St Francis as the brothers did. Instead, she and the women who followed her were put into a monastic structure. Prevented from adopting St Francis’ mendicant way of life, St Clare nonetheless opened herself to the Spirit of the Lord and his holy manner of working both in prayer and in action.

She held true to the Franciscan/Gospel project stated in the Rule of 1221 that calls for living an evangelical life (poverty, chastity, and obedience) of conversion and penance in minority, simplicity, joy, and mutuality of care (fraternity) and service (mission) in following in the footsteps of Christ Crucified as Francis did.

In St Clare’s process of discernment was, like in St Francis’, an optimistic and joyous trust in God and the goodness that the world can offer. She was unlike other abbesses of her time. She regularly washed the feet of the sisters returning to her monastery. She tended to the sick sisters and even washed their bedding. She sent the extern sisters out. She encouraged mutuality of care and love among the sisters even in the administration of the monastery and Order.

St Clare transformed and offered an alternate reality of women monasticism of passivity and removal from the world to one of activism and engagement of the world. She and her sisters became mendicants-in- monastery and fraternity-in-mission.

St Clare’s daring, her commitment to the Franciscan/Gospel project of St Francis, her trust in the Spirit of the Lord, and her courage in the face of adversity can be reminders to us as we live our own Christian faith and life. For us brothers of the Custody, St Clare is both a reminder and a challenge as we look back on the past three years to understand the past and present to plan for the future now and in the coming months.

If we are true to our Franciscan project and open to the Spirit “following the footsteps of Jesus so that the kingdom of God may grow in the world”, we can move forward as a fraternity-in-mission and in our own personal conversion, from good to better.

May we hold on to God and our Gospel project as St Clare did. In words of St Clare to St Agnes of Prague (2nd Letter): “What you hold, may you hold, what you do, may you do and not stop. But with swift pace, light step, unswerving feet, so that even your steps stir up no dust, may you go forward securely, joyfully, and swiftly, on the path of prudent happiness, believing nothing, agreeing with nothing that would dissuade you from this commitment or would place a stumbling block for you on the way, so that nothing prevents you from offering your vows to the Most High in the perfection to which the Spirit of the Lord has called you.”

← Prev: The Wind Blows Wherever it Pleases Next: St Clare and the Path of Purification → 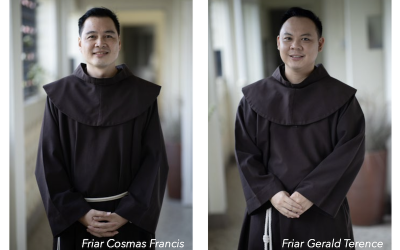