May the risen Lord give you peace!

This Friday (16th April 2021) , we will celebrate Friar Cosmas Francis and Friar Gerald Terence’s Solemn Profession at Church of St Mary of the Angels at 7p.m.

Do join in our live broadcast via our YouTube channel on: http://bit.ly/OFMSP2021.

Thank you and may we continue to dedicate ourselves joyfully to the Lord’s call for each one of us.

Peace and all good. 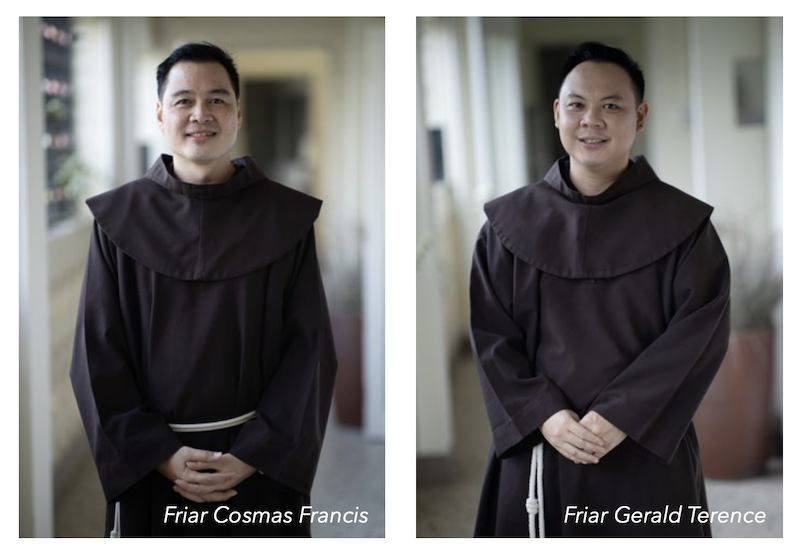 Friar Cosmas Francis and Friar Gerald Terence will make their Solemn Profession of Religious Vows at the Church of St Mary of the Angels on April 16.

They share what making their Solemn Profession of Vows, after years of discernment and formation, means to them, and their hopes for the future.

What does your Solemn Profession of Vows mean to you?

Cosmas: Solemn Profession for me is a sign and an expression of my love for God who first loved me for what I am. I want to give over my life completely into the mysterious work of God through the identity of the Franciscan, and for the church.

What do you hope to achieve in the long term as a friar?

Gerald: I hope that I will continue to embrace my true self, my shadow, my struggles, and know that by the grace of God and the support and unconditional love from all of you, “I can do all things through Christ who strengthens me” (Philippians 4:13). I will breathe in my courage and exhale my fear.

Cosmas: I have experienced many times the mercy and love of God in my shortcomings and weaknesses. I hope that I can express this love of God through deeds and words for the good of all. I encourage everyone to never get tired of getting closer to God despite the obstacles and challenges in daily life.

The taking of solemn vows of poverty, chastity and obedience in the Franciscan way of life marks the beginning of full, lifelong membership in the Order of Friars Minor. After Solemn Profession, friars seeking ministerial priesthood prepare themselves for the Sacrament of Ordination to Diaconate followed by Priesthood. Friars who seek to remain as lay brothers engage themselves in ministries for which they are gifted and trained to serve the Church and the World.

The Feast of the Presentation of the Lord on February 2 is also World Day for Consecrated Life, when those in consecrated life are invited to reflect on how they can be the light of Jesus Christ to all peoples.

We, the Franciscan Friars of the Custody of St Anthony (Malaysia-Singapore-Brunei) would like to take this opportunity to share with you who we are and what we do.

We ask for your prayers as we continue to discern how we can support you in living in the light of Christ as the pandemic continues and beyond.

May the powerful intercession of St Anthony protect us and guide our way to Jesus!

World Day of Consecrated Life – The Order of Friars Minor

Before friars from the two communities in Singapore, Brothers Julian Chua, Sylvester Singh and Timothy Fong were received into the novitiate, and given their habit of probation. Custos Friar Derrick Yap presided at the ceremony and celebration held at Greccio Friary on 9 January.

During the liturgy, when they were asked what their intentions were, all three responded with the request

“to be admitted to your way of life, that we may be tested and learn how to take on our shoulders the yoke of the Lord in love and joy”.

They were then called to sign the Book of Life.

Friar Derrick told the novices, “As you begin your journey to true joy in your daily life, invite St Francis to walk with you. Ask him to be your companion on this journey. Do take time to recall the moments when you encountered Christ, and allow that experience to encourage you in your moments of difficulties. Like St Francis and St Anthony, we are called to follow Christ. Doing so requires us to take to heart the teachings of Jesus and imitate His example, which may involve letting go of whatever prevents us from being free to follow Him.

“Of course, this is easier said than done as we are often weighed down by the burdens and challenges of life, and our human tendencies often get the better of us. However, a new year offers us fresh hope and the promise of new beginnings. The question I humbly invite you to reflect on is ‘As you excited to be a Franciscan Friar?’”

While the focus was on the novices, Friar Derrick reminded the friars gathered of their own profession and commitment to the Franciscan life and vocation. “We ought to be fully invested in our relationship with Christ and in our prayer life. Only then can we see the fruits of our discipleships. Together as one brotherhood under the one fatherhood of God, let us support one another with joy in our earthly pilgrimage with Christ at the centre of our lives. Let us also offer our Lord our thanks and gratitude for the privilege of belonging to Him alone and for the opportunity to bear witness to our love for Him in our calling.” 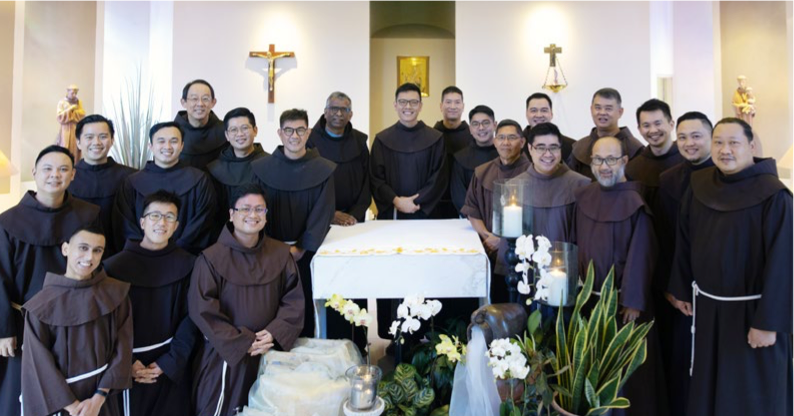 The Custody of St Anthony (Malaysia-Singapore-Brunei) turns 30 this year. A lot has changed in those three decades. When the Custody was formed in 1991, there was just one parish community and one formation house in Singapore. Most its friars were in initial formation and its ministries were dependent on missionaries.

Today, there are three parish communities and two formation houses in three dioceses. There are 40 friars, 32 of whom are Solemnly Professed and in full-time ministries. Most of them are from Malaysia and Singapore.

Today, even those who do not know the Franciscan Friars know when they see the customary brown hooded habit that the man wearing it is a friar.

The history of the Franciscan Friars in Singapore, however, dates much further back than 1991. The first friars arrived in Singapore from Europe and China in 1957. These missionaries from the Catholic religious order founded by St Francis of Assisi more than 800 years ago were, as their contemporary brothers are today, dedicated to restoring God’s church through three main objectives – witnessing by living as brothers, boldly proclaiming the Gospel to the world, and showing the world that God can be encountered in every person and every created thing.

Franciscans serve together in their corporate ministries in support of the greater Franciscan family. They engage in inter-faith and ecumenical dialogue, recognising all of creation as one family while upholding justice and peace. The friars also foster individual and communal lives of prayer and devotion.

The Franciscan Friars strive to communicate the loving face of a God who became one with humanity. Much is invested in formation and education not only of friars, but also of the people they serve, reaching out to those who have not yet encountered God as the Good News. The friars recognise that God’s people can be found in the most unexpected and inaccessible of places, and will do and use what is needed to proclaim the Gospel.

In every person and every created thing, there is innate goodness and inherent beauty. Believing that God can be encountered through this goodness and beauty as well as in the simple things in life, the Franciscan Friars celebrate simplicity and beauty, providing liturgies and settings that enhance the experience of prayer, contemplation and community.

In 1958, a year after they arrived, the friars constructed St Anthony Friary – with its adjoining chapel building
– along Old Jurong Road. It was established as a sociological centre for translating the Church’s social teachings into Chinese as a tool to counter communist propaganda. It was also a base for apostolic outreach to the entire Jurong area up to Tuas village. The friars taught catechetical courses, assisted at the Catholic Chinese Central Bureau, lived and worked with the students and teachers in the largely underdeveloped western Jurong area, and taught Christian philosophy at the newly-founded Nanyang University.

In 1970, the friars’ chapel was converted into a parish church and christened the Church of St Mary of the Angels.

Then in 1991, the Custody of St Anthony of Padua (Malaysia-Singapore-Brunei) was formed, with Friar Phillip Miscamble from Australia as the first Custos. Between 1996 and 2002, the friars ran the Franciscan Retreat Centre in Jurong West while in 1999, a new community and parish ministry was set up in Kuching, Sarawak.

The Franciscans continued to establish HDB-based communities in Bukit Batok and Hougang, Singapore, before a new Franciscan complex that included the Church of St Mary of the Angels was inaugurated in Bukit Batok in 2004. In 2008, another new community and parish ministry was formed in Malaysia, this time in the Diocese of Melaka-Johor.

For many years, friars from Australia, United States, Germany, India and Sri Lanka had been missioned to serve in the Custody. However, in more recent times, Singaporean and Malaysian friars have been sent to serve in full-time ministries and missions overseas.

With the Custody’s commitment to ongoing formation in service of the Order and local Church, some Solemn Professed Friars have been sent overseas for further studies in fields such as scripture, theology, liturgy, canon law, formator’s training, counselling and spiritual direction. In addition, the Initial Formation programme in Singapore has included students from Indonesia, Korea, China, East Timor, Australia and New Zealand.

In the next few years, the Custody of St Anthony hopes to consolidate its presence and commitment to the service of the local Church in Singapore, Sarawak, Johor and Penang; to engage in formation at all levels – pastoral care of vocations, Initial and Ongoing Formation; and to continue to focus on mission and evangelisation.

May God guide us in our endeavours to be the light of Christ to all peoples. 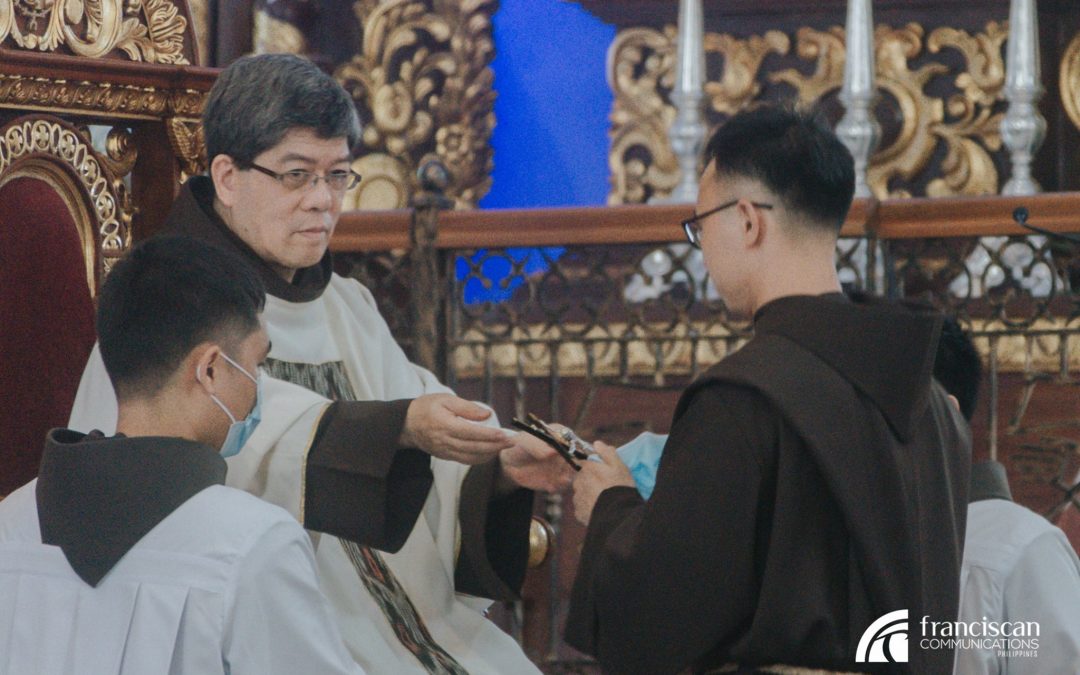 On July 11, 2020, Friar Marvin Voo made his first profession into the Order of Friars Minor of the Custody of St Anthony Malaysia- Singapore-Brunei.

The First Profession is the official entry into the Order of Friars Minor and it comes after a year of Postulancy and one year of Novitiate. Postulancy can be likened to a year of probation. During this time, the gradual transition of culture and intensification of fraternal living help to make clear a candidate’s personal and individual inspiration for being called to the life, spirit and mission of the Friars Minor. Novitiate is a time to consolidate and further clarify his vocation intentions as he prepares for the First Profession. During Novitiate, the candidate receives the Friar Minor’s habit and the cord without
any knot because he has not taken the vows of poverty, obedience and chastity. This was the path Marvin Voo took over the last few years.

Friar Marvin made his First Profession at the Minor Basilica Santuario de San Pedro Bautista Parish, Quezon City, Philippines. The profession, made into the hands of the Provincial Minister, Friar Cielito R. Almazan OFM, was for 16 months. The next milestone in Friar Marvin’s journey would be the renewal of profession to be held on April 16 2021 (the traditional date of St Francis’ profession into the hands of the Pope), with the other friars in formation. At his profession, the newly-professed Marvin received his knotted cord.

The next day, he flew back to Malaysia and joined the community in Ayer Hitam, Penang.