In early 2011, the Religious in Malaysia, Singapore and Brunei decided that it was time to join together and raise awareness of the serious issue of human trafficking.

We decided on a common initiative – a set of five information brochures that would be distributed through all our ministries in the three countries. The brochures are available in English, Chinese and Malay.

As we have received several requests for brochures from other priests and religious in our region, we decided to make them available online to aid their use and so increase awareness. If you use extracts, we ask that you please include a citation of the Conference of Religious Major Superiors Malaysia-Singapore-Brunei.

Several religious, including the Franciscan Friars, have planned information sessions, prayers and talks around this issue. The following videos produced by MTV EXIT may be useful in helping you learn more:

Traffic: Lucy Liu
Traffic is a unique and powerful program presented by Lucy Liu that addresses the issue of human trafficking in Asia Pacific. Told through the stories of real people, the show features Ana, trafficked from the Philippines and forced into prostitution; Eka, an Indonesian woman, trafficked into forced domestic servitude in Singapore; and Min Aung, from Burma, trafficked to Thailand and imprisoned for 2 years in a factory.

Inhuman Traffic: Angelina Jolie
MTV EXIT presents Inhuman Traffic, a special program presented by Angelina Jolie. This program is a fast-moving and compelling documentary that provides an introduction to the human rights tragedy of trafficking of women and girls for sexual exploitation in Europe. Featuring Anna, a woman from Romania, who was trafficked by her neighbour to the Balkans where she was forced to be a prostitute for 2.5 years, and Tatiana, a victim who spent 6 months as a sex slave in Amsterdam after being sold by her boyfriend. Their harrowing stories are told along side other characters in the trafficking chain, including a potential victim, a young man who pays for sex, an anti-trafficking police officer, and prevention and assistance organisations.

Intersection: An MTV EXIT Animation
Intersection is a stark, stylish, and high quality Anime (Japanese-style animation) that provides a hard-hitting look at human trafficking and sexual exploitation in Asia. It is a riveting story told from the perspectives of five individuals who all play a part in the trafficking chain: the victim, the trafficker, the mamasan (brothel owner), the brothel client and an undercover cop.

A Rosary against human trafficking

2)  Stations of the Cross

The Franciscan Friars unite with the Conference of Religious Major Superiors (Malaysia-Singapore-Brunei) in saying NO to Human Trafficking. 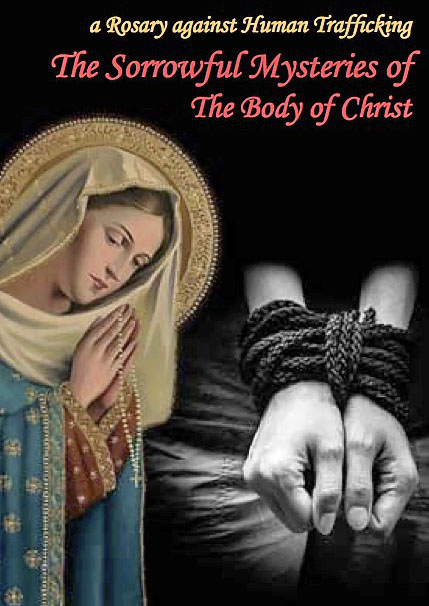 http://saynotohumantrafficking.info Please click this link to join us in praying a rosary against human trafficking

This site uses Akismet to reduce spam. Learn how your comment data is processed.