Franciscan friars gather at the assembly in preparation for Chapter.

The week of 1 – 5 July 2019 saw the gathering of Franciscan Friars from the Custody of St Anthony gathering at the Stella Maris Retreat Centre in the Diocese of Penang.

There were a total of 36 friars from Singapore, Kuching, Johor and Penang, including our friars in formation coming together for a Custody Assembly which is held every three years prior to the Custody Chapter later in the year.

This fraternal assembly included days of intensive discussions both in smaller groups and in plenary, praying together the liturgy of the hours and celebrating the Eucharist, enjoying meals together and a nightly recreation for brothers who are posted in the different regions of Malaysia-Singapore to reconnect and renew bonds.
At this assembly all the friars, including those in formation had equal opportunity to express their views on all matters and were included in the vision and planning for the future of the Franciscan presence in Malaysia and Singapore.

This year, the assembly was held in Penang as an introduction to a new establishment of the friars’ presence in the diocese of Penang. With the warm welcome of Bishop Sebastian Francis, the Franciscan Friars of the Custody of St Anthony established a friary at Tanjong Bunga and assumed the pastoral care of the parish Church of Risen Christ at Air Itam. The assembly at Penang also provided the occasion for the blessing of this new friary after having undergone some minor renovations to accommodate 8 friars.

The friary being near to the College General Seminary of Malaysia has given us the option of availing our own friars in formation some opportunity for initial formation at the seminary. On one of the evenings, the friars boarded a 40 seater bus to head out to the Church of the Risen Christ to visit the parish which is under the pastoral care of the friars. The liturgy of the hours for Evening Prayer was celebrated in the church and followed by dinner at the parish hall. Bishop Sebastian Francis joined the friars for this occasion and had time to catch up and acquaint himself with them.

The occasion provided the diocesan Bishop of Penang to meet the friars informally and which was followed with a Penang classic; a Durian Party with this king of fruits provided by a parishioner who owned a plantation! Like the five loaves and two fish, there was plenty leftover!

As part of the assembly agenda, all ministries undertaken by the friars in Singapore, Kuching, Johor and Penang were presented together with their financials for a review and comment by the friars present.

Reports were given for the last three years and future directions proposed by those in current responsibility for these ministries and offices.
Formation matters which included the different stages of formation for the friars were discussed which was followed by a lively discussion with inputs and reflections coming from the Franciscan seminarians themselves.

These triennium assemblies provide a fraternal base to assess and plan the future of Franciscan life in this part of Asia.

While a number of our friar students provided secretarial backup, many others were involved in the liturgy, hospitality and housekeeping. The process of the assembly resulted in the formulation of resolutions which will be brought to the Custody Chapter in October 2019 for further deliberation, fine-tuning and voted upon by the solemn professed friars.
The democratic process is a feature of the mendicant Order who for the past 800 years has relied upon and with the guidance of the Holy Spirit whom St Francis said is the true Minister General of the Order.

Friar Robin Toha OFM, who is a friar in formation summed up his experience of the assembly thus, “The Custody Assembly was a joyful event, like how an extended family meet for a reunion dinner. Even better, we had not just spent one evening, we spent a week to catch up. Like any family, we have differences and challenges. As a young friar, it is very heartening to witness the spirit of renewal and fraternity that we share. I am proud to be a part of it. If we can be brothers despite the challenges, then we can hope for the bigger community, the church. And if we have hope for the church, we can also have hope for society, for the world.”

Originally occupied by the Franciscan Sisters of Sarawak, this building has been leased to the Franciscans as a parish house since 2000, for the friars serving in St Ann’s Mission. It is the Custody’s pioneering friary outside of Singapore, and a sign of commitment to preach the Gospel by living out the Franciscan vision as a religious brotherhood in the mission territory of Borneo.

‘St Francis’
St Francis discovered God’s Word to be the Good News of love and mercy, bringing freedom, joy and peace to all. He recognised that God’s people could be found in some of the most unexpected and inaccessible places. He saw God’s goodness and beauty all around him and wanted only to proclaim this truth to all. As this friary in Kota Padawan, in 10th Mile Kuching, houses the first community of friars in East Malaysia, the friary was dedicated to our founder.

What We Do
All the friars in this community serve in St Ann’s Mission, which includes 53 outstations. Individual friars are also involved in various ministries of outreach beyond the parish. The friars invite neighbours and parishioners to join them in the friary chapel for morning prayer and mass on weekdays, and visit the kampung outstations at night.

Through this mission, the Franciscan Friars seek to boldly proclaim the Gospel of Jesus Christ to the world, and recognise all persons and all of creation as members of God’s one family.

A Prayer of St Francis
We adore You,
Most Holy Lord Jesus Christ,
here and in all Your churches
throughout the world,
and we bless You
because by Your holy cross,
You have redeemed the world.
Amen.
– Prayer upon Entry to all Churches

Also known informally as the ‘Student House’, Greccio Friary is a fomation community in Chestnut Drive, Singapore. Inspired by St Francis of Assisi, the brothers of Greccio seek to follow the call to live the Gospel in daily life, in fraternity, work, prayer, and study.

‘Greccio’
The friary of Greccio is named after the hill-side cave in the Rieti valley, halfway between Rome and Assisi, where St Francis invented the first Christmas crib. One Christmas Eve, Francis surprised the people of the village when he used real animals and villagers to form a living tableau, to impress on all the utter humility of God who came to be with his people in the poverty of a stable, in the form of the Infant Jesus. Greccio Friary is situated within the grounds of the Convent of the Holy Infant Jesus, Upper Bukit Timah.

What We Do
The community of Greccio is largely made up of post-novitiate friars in initial formation. Most travel daily to St Francis Xavier Major Seminary for studies, and engage in part-time ministry, mission and other supplementary programmes, while preparing for future full-time ministry within the regional Church. Within the fraternal setting, several Solemn-professed friars, who are involved in a variety of full-time ministries, provide accompaniment on this journey. The brothers in Greccio seek to uphold the values of justice and peace, communicating the loving face of a God who became one with us, and celebrating simplicity and beauty, through which God can be encountered.

A Prayer of St Francis
You are beauty, You are meekness,
You are the protector, You are our custodian and defender,
You are strength, You are refreshment, You are our hope
You are our faith, You are our charity,
You are all our sweetness, You are our eternal life:
Great and wonderful Lord, Almighty God, Merciful Saviour.
Amen.
– from The Praises of God. 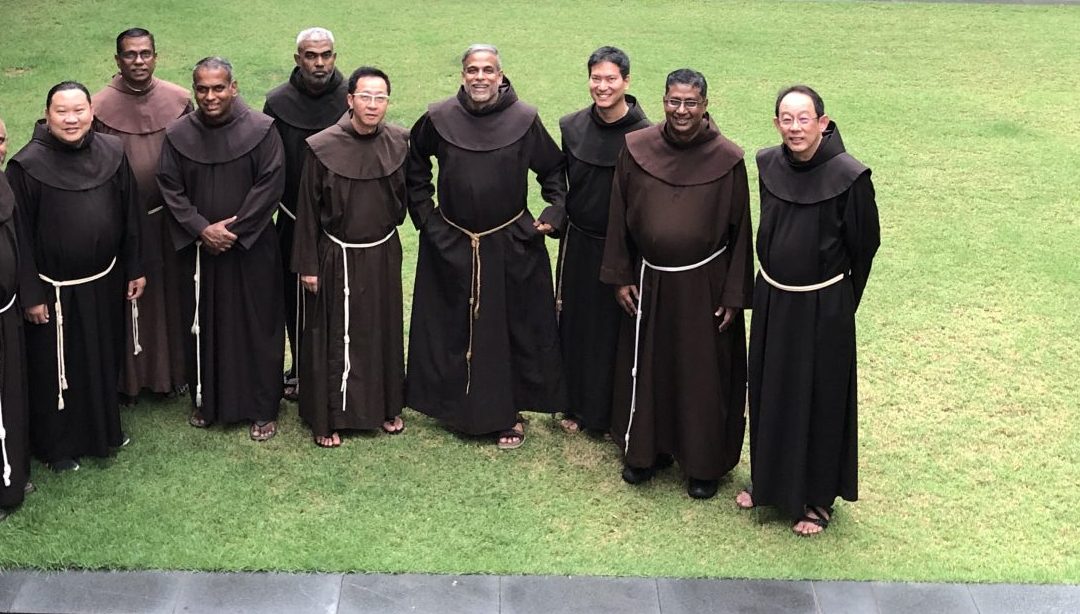 Built in 1957 as a Sociological Centre, St Anthony’s is the main friary of the Custody in Malaysia-Singapore-Brunei. Currently, the friary houses the Custody administration, as well as a formation community. At all these levels, the Friars remain inspired by St Francis of Assisi and strive to live out the call to fraternity and Gospel witness, in work, study, prayer and hospitality.

‘St Anthony’
St Anthony of Padua joined the Franciscan Order in the 13th Century and personally knew St Francis. He was a renowned missionary, theologian and preacher. His heart was burning with God’s Word. Through his life, his preaching and his works, many came to know mercy, love and wonders of the Lord. He is the patron saint of the Custody and this friary.

What We Do
The community of St Anthony houses the Custody’s novitiate and pre-novitiate, with young men from Malaysia and Singapore on a full-time live-in Franciscan journey in a process of preparation and discernment towards the profession of First Vows. Accompanying them on this initial journey are several Solemn-professed friars, who serve full-time in the administration, formation and pastoral works of the Order.

The community fosters individual and communal lives of prayer and devotion, developing the experience of prayer, contemplation and community. Through this fraternity, the Order invests in the formation, education and support of our Friars towards proclaiming the Gospel.

A Prayer of St Francis
Most High, glorious God,
enlighten the darkness of my heart
and give me true faith,
certain hope, perfect love, and
that I may carry out
Your holy and true command.
Amen.
– from the first recorded prayer of St Francis,
The Prayer before the Crucifix